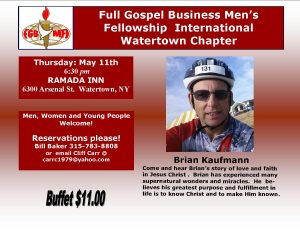 Brian was scheduled to speak in December 2016 but that meeting was cancelled.

Brian lived an idyllic childhood. He was born in Orange County California and grew up in Burbank where his father worked as an accountant for Walt Disney. The family later moved to Ledyard, Connecticut and eventually moved to Lowville, NY. There his father died of cancer when Brian was 15, ending his ideal childhood and leaving him angry with God. But Jesus got hold of him soon after and radically changed his life forever. Brian has personally witnessed and experienced many supernatural wonders and miracles, and has had encounters with angels and demons. He believes the greatest purpose and fulfillment in life is to know Christ and make Him known. Brian holds a Bachelors degree in Business Management as well as several other lesser degrees and certifications. He is a Journeyman Electrician by trade and has worked as a power plant operator and wind turbine technician among other things. He is actively involved in music ministry and short-term missions. Brian married Cheryl Tiffany of Lowville, and they have seven children (6 boys and 1 girl) and eight grandchildren so far! They have lived in Carthage, NY for nearly 30 years.